Janet Evanovich is stealing my summer!

You heard it right folks. Since we last met over a lovely bonfire, I have made precisely 2 beaded objects. One simple hemp necklace, and half a barrette for my niece. That's it. Really.

I have played around with a few things, but nothing I liked enough to bring to fruition.

I have, instead, read 12 of the 17 Stephanie Plum novels by Janet Evanovich. They are a fun read, but I have this problem with books. I can't just set them down and pick them up again later. I pick one up and I have to finish it. Some people won't go to bed mad, I won't go to bed with a half finished book...I fully blame my mother for this interruption. She left Fearless Fourteen laying around in her bathroom where anyone could pick it up. 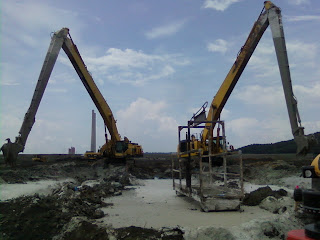 To give you an idea of size, my head doesn't come up to the top of the tracks on these rigs.

Well, gotta get back to them. Happy beading everyone!
Posted by marsspyder at 8:22 AM 1 comment: