I thought long and hard about my entry, going over every wordless tune I could think up. eventually, I settled on the allman brothers Jessica.

I started thinking about what I would bead and how I would bead it. I had a few sketches, but the whole time something was nudging against the edges of my subconscious

When I was in high school, I played horn in a community youth band (the Warren Junior Military Band). 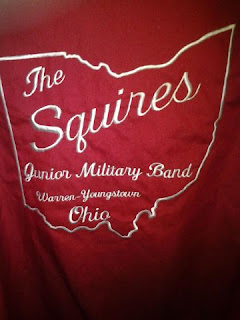 Every Sunday and Wednesday we'd meet at the Aristocrat bingo hall in Liberty, OH and play.  We were more than just a high school band, we cared about what we were playing.
To this day, I can still remember parts of the music we played. It's carved into my soul.
﻿
One of the traditions of the Band was to play the Stars and Stripes Forever at our spring concert.

Band alumni were welcomed at this point to take to the stage with us and play as well. Alumni were even welcomed to borrow an instrument from an existing band member. I never actually saw this happen, but it was understood that if someone borrowed your horn or your flute or whatever, you moved over and let them have it.

The Stars and Stripes Forever is such a big bold piece. The low brass/woodwinds has this raw power supporting everything. The middle range instruments hold the rhythm together and keep things moving, and the high brass/woodwinds have the melody.

Then, about 2 minutes in, there's this piccolo. Just hanging out flittering over everything, like a butterfly on a battlefield.

That's the inspriation for my bracelet.  It isn't quite as powerful as I'd have liked it to be, but the idea is sound.


I decided initially that I wanted a big dark base, with structure. I contemplated zig zags. That...not so hot.

Then I started searching through bead mags, I found the pattern for "Show off your shapes!"  Designed by Helena Tang-Lim in te August 2012 issue of Bead and Button.  This would work...

I chose black Tilas for the background. That's the low brass. Then everything is held together with gold 15/0s and 3mm Swarovski crystals.  Thats the rest of the band. Brassy, but blending. 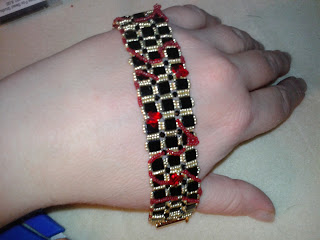 For the piccolo, I was originally going to use hot pink.  I KNOW I have hot pink beads. I always buy hot pink beads and rarely use them. Apparently, I have misplaced them. All of them...not possible.

I wanted to embellish the base like the flight of a butterfly, and I think I've nearly got what I wanted.  I redid the embelishment a few times, and I'm not quite satisfied, but, I think the message gets across. 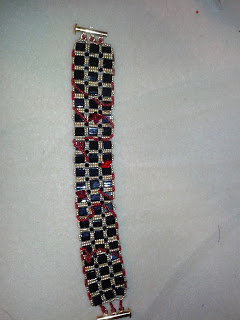 Now that I've shown you mine, hop over to the below and check out what their ears saw!

If technology is not with me this morning, you can also find all the participants here
Posted by marsspyder at 8:13 AM 16 comments: