I made number 6 on the way from Tennessee to my home near Pittsburgh. 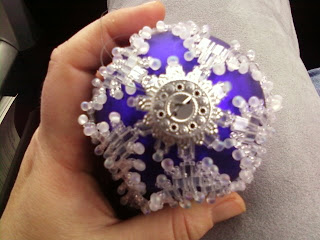 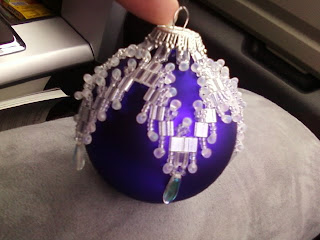 The pattern was loosely based on a project in Beadwork involving Tilas, but I didn't have the magazine accessible in the truck, so I went by memory.  This one is for the husbeast, whose favorite color.


Number seven was made while I was at home.  This one will eventually make its way to my parents-in-law.  I used some beautiful deer antler buttons that I found at the Powder Horn Trading Company in Kalispell, Montana. 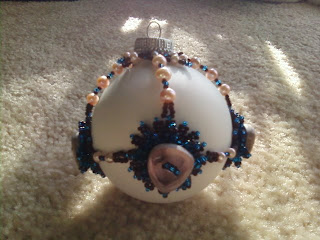 I also used peachy-ish colored pearls that I found there.  The idea with the buttons came from Bead and Button (I think...) there was a pattern using vintage shank buttons.  I altered the 2-hole style of the buttons with a bit of wire to work the pattern.  I covered the wire with a few 11/0s.

I made number 8 on the way back from Pittsburgh.  It happened after a failed herringbone attempt at a rivoli bezel, then a failed netted bezel, and a failed peyote bezel.  I don't know what was going on, so I gave up and did other things with different beads.  I seem to have forgotten to take photos of number 8.  Crap.  Well next time, I'll tell you all about it :)

Then I got sidetracked when I got home and startd back on the Hallowe'en quilt.

Posted by marsspyder at 12:18 PM No comments:

I have been beading in my free moments.  I really really have...
I started working on an ornament using Laura McCabe's Eiffel Tower Ring pattern from Beading Across America but, when she says size 15 Czech Charlottes, I think she means it.  Now I have  weird purple thingie sitting on my bead tray.  It kinda looks like one of those little tables that comes in a pizza box.  I didn't get to the add the rivoli part. I gave up.  Poor little guy.

I did finish another ornament.  I'm calling it Creamsicle.  It has lots of silver lined orange Delicas and pearls. 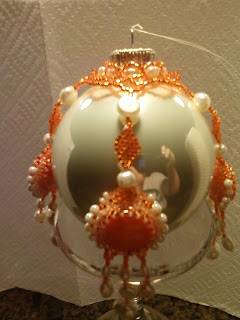 The focals are beads from Hobby Lobby.  I like it. 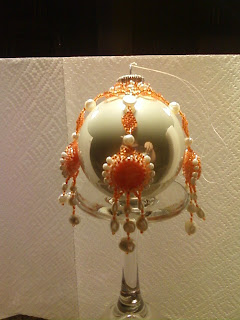 I also finished my medicine bag for my father in law.  I decided, afte seeing a magpie for the first time over Thanksgiving, that a magpie would be a most fitting creature to represent me.  They are smart, they like shiny stuff, and they hoard things.  Me to a tee. :)

He is black, white, and iridescent blue/black Delicas and Treasures and 15/0s in black and white, beaded on felt, on leather, with an elk ivory, obviously . 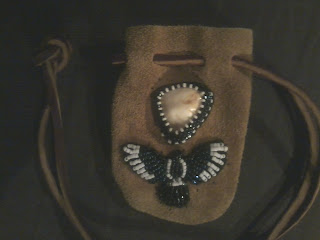 Posted by marsspyder at 1:17 PM No comments:

Ornament time is upon us. Damn near passed us by! EEK!

What happened to #1? (remember the flamingos?) 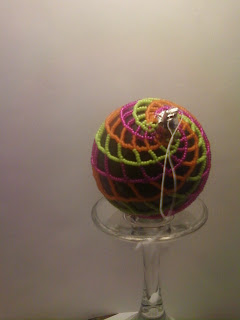 It is simple netting but the progression of colors does really cool stuff, dunnit Ern? 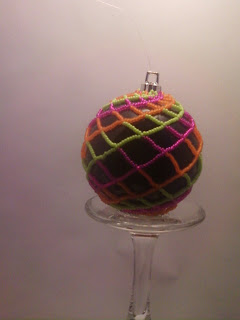 Looks even cooler spinning around in circles :)

Number 3 s a gift for two of our closest friends. They made mention that they have never received an ornament, so I asked their Christmas colors, and they replied magenta and turqouise, but its a dusty magenta and a blue-y turquoise. I think my colors are a bit vibrant, but I am pleased anyway. 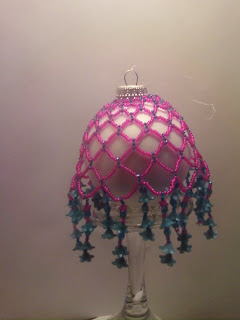 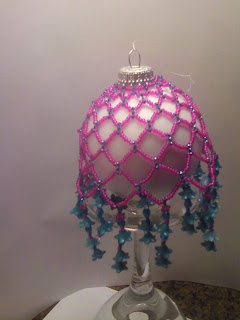 Finally is number 4. I am all about rivolis and ornaments now. This one has blue rivolis with a peacock finish, small blue-green rounds, and gold 15/0s. 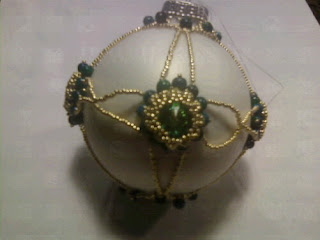 I like it even if the cover is too loose in one place and too loose in another. I think I'll call it blue jean. 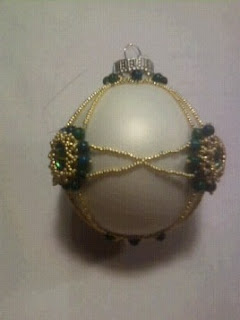