The blessings of being able to chew

So the dry socket seems to have healed, nearly, if not totally and I'm able to eat stuff requiring chewing again.  I can't yawn as enormously as usual yet, because the "hinge" is still tight, but it should loosen up.

I made a necklace with one of my upper teeth(the one from the last post, actually)

I took it, in its unfinished state, to the dentist last Thursday when I had a revisit for more tooth hole packing, and the dentist who was taking care of me was super impressed, and called for more dental professionals.  There were photos taken and such.

I showed my mouth jewelry to my family as well. They were all like wow that's so pretty! Then after a closer look..what is that in the center? OHMYGOD its a tooth ewwwwwww!

A few of my cousins were impressed, but they're teenage boys, so... 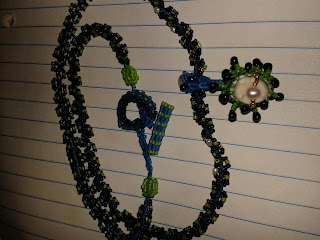 I made a spiral rope with matte transparent blue and green delicas, and opaque size 15/0s.
I also added a few FW pearls and silverlined gold delicas near the pendant.
The tooth itself was wrapped with the same blue and green delicas, with green fringe ending in black 3.4mm drops.
A simple toggle (that toggles!) ended the ordeal. 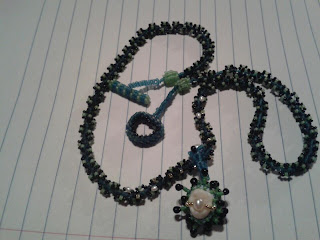 Hope you all had a very Merry Christmas and if  I'm not back by then, Happy New Year!
Posted by marsspyder at 8:46 AM